> Captain Hooter And The Seventh Trichome

Ahoy tharrr, and gather ’round the campfire, me hearties! ‘Tis time for another tale of that bud-blazing buccaneer of the Stoner Seas. For any of you land-lovers out there thinking a cannabis connoisseur’s job is smooth sailing: think again. Today, with International Talk Like A Pirate Day well over a month’s voyage behind us, we bring you a spine-chilling adventure where weed plays the starring role. Sit back and prepare to be amazed by the tale of Captain Hooter and the Seventh Trichome; a swashbuckling sailor’s story of hope, betrayal, ambition, and weed – lots of first-class Amsterdam weed… Read on at your own peril, matey… ARRRR!

If you’ve never heard of Captain Hooter before, you’ve been missing out. The Captain is a man on a mission: for years, he has been working as a chronicler of Amsterdam’s coffeeshop culture. He has been working hard to try every single one of the city’s weed dispensaries, simply because it had never been done before. The results of his investigations were collected in his book, Captain Hooter’s Connoisseur’s Guide To Amsterdam Coffeeshops. Beyond his writings, Captain Hooter has been a member of the Cannabis Cup Jury and general celebrity warrior-scribe of the cannabis scene, as you can see in the video below.

For good measure, we would like to point out that Captain Hooter is not actually a pirate in real life. His methods are not based upon keelhauling, boarding merchant ships, or shouting ARRRR from the top of his lungs at random intervals. His approach is one of science; his main tool is the connoisseur’s magnifying glass, and his Captain’s rank refers to the playfully military discipline with which he marches through the city’s weed scene. We just thought it would be fun to cast him in a new piratey light just this once, especially since  his Quest For The Seventh Trichome sounded like something out of an adventure novel… 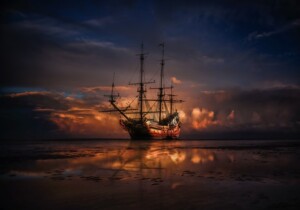 So with that out of the way, lets dive straight into this thrilling tale of our proverbial pot pirate!

Captain Hooter And The Quest For The Seventh Trichome

The world of weed can be a tough place at times. The cannabist’s playing field is definitely not all highs: you just have to take the lows in stride and smoke ‘em if you got ‘em. That is exactly what happened when local cannabis corsair Captain Hooter swung from euphoria to utter dismay – and back – faster than you can say ‘cannabinoid profile’. The reason for this emotional rollercoaster ride? Trichomes. In this particular case, it wasn’t just any lousy resin gland, either. The Captain was scouring the high seas of Amsterdam to find the White Whale of the cannabis scene: the Seventh Trichome.

Trichome. The seventh one to be discovered, to be precise. You see, Captain Hooter is something of a local legend here in Amsterdam cannabis circles. He has dedicated his efforts to knowing all there is to know about the city’s coffeeshops and all the goodness they sell. Obviously, that goodness is cannabis, but the green buds you know are in fact just a vessel, or a package, for fascinating little things called trichomes.

Trichomes are part of the anatomy of a weed plant. A trichome is a resin gland, and inside that resin is everything that makes weed such an enjoyable plant. Trichomes are the tiny glistening ‘crystals’ you see sparkling on good buds. They’re arguably its most important part, in fact: they produce and contain all the THC and other delicious cannabinoids. Trichomes also contain the tasty terpenes that determine the flavour of your smoke and the quality of your high. Presently, depending on how you classify them, six different types of trichome have been identified. Rumour has it, though, that a seventh type of trichome must exist out there somewhere.

Captain Hooter is a man of science. He is also a man of smoking. As it happened, these two passions were to crash headlong into one another – with disastrous consequences. So what happened? Well, after your Cap’n returned home from one of his tours of the finest Amsterdam weed dispensaries, he set about creating stunning images of his bud bounty using his microscopes and artistic skills. To honour the birthday of herbal hero Jack Herer, he decided to create art in which the head of Mr. Herer was cleverly hidden inside enlarged pictures of trichomes. Clever indeed. To check whether people would notice his artistic tribute, he shared the pictures with some expert ‘interpeners’,  specialized in analysing terpenes in cannabis closeups as they searched for new discoveries, including of course, that fabled seventh trichome. The Captain smiled quietly to himself and waited for the experts to find the tiny Herer heads hidden in the images. Having completed his work, he happily went on to smoke the quality buds he’d been studying. A job well done – or was it..?

Everything seemed perky, including the taste of those buds, right until one of the interpeners called in. He was wondering whether the fine trichome Herer pictures were some kind of prank… Had they seen through his ploy so soon? Sadly, the hidden Herer heads were not the point. While going over the images, one thing stuck out like a sore thumb: the shape of the trichomes used as portrait frames…

It was just a casual question, but the sense of gravity it carried was clear. Had Captain Hooter noticed that these close-ups appeared to contain THAT FABLED SEVENTH TRICHOME?!!

Wait, what?! Had our cannabinoid capitano just accidentally overlooked the single most important discovery of a lifetime? Or even worse, had he just leaned back into the couch with a satisfied smile, after smoking that unique, one-off, needle-in-a-haystack trichome everyone was looking for?? The mere thought was enough to wipe the smirk off the Captain’s face, taking the high with it as it went.

Now, as you now, Captain Hooter is not the kind of guy that panics easily. Yet panic he did. Frantically overturning every last piece of furniture, every ashtray, and every loose scrap of paper in his home, he went all out to salvage what remained of his recent cannabis booty. To his horror, he couldn’t find a single gram om green anywhere. That’s what you get when you smoke the good stuff: before you know it, you need to return to the coffeeshop for refills. Problem was, however, that the dispensaries he had visited didn’t have anything left of what he had bought before. Had that elusive trichome number seven eluded him once again?

Apparently, it had. The only possible source for that much-needed resupply were plants that weren’t even flowering yet. And once they did produce a harvest, it was anyone’s guess whether they would contain more of the miracle trichome to investigate… Believe it or not; sometimes, being a celebrated cannabis authority feels like the worst job in the world.

Thankfully, the Captain made a swift recovery. Shrugging off his disappointment, he quickly set about devising new plans. Surely, now that he had come so close, he would stumble upon the mystery trichome again soon? Well, no, actually; as it turned out, cannabis history decided to take a different turn. Soon after, a research team on the other side of the Atlantic proudly reported finding that magical seventh trichome. So much for immortal ganja fame!

On second thought, perhaps all of this was simply meant to be. Finding that fabled T7 prize was just not what the Captain was destined for. Oh well. There’s always another battle to win on the raging seas of the cannabis community, right? Like they say, when the growing gets tough, the tough start growing.

Unfazed, Captain Hooter decided to hoist the sails, lift the anchor, and navigate the high seas of the Amsterdam coffeeshop scene once more. With a defiant ‘Yaarrrrr!’, he planted his boots firmly onto the bridge and plotted a new course: all hands on deck for a new adventure. As the sun set to the west of Amsterdam, our beloved bud buccaneer was already picking up speed to start his Quest For The Eighth Trichome. Avast, mateys! The tingle behind me eyepatch tells me thar be trichome treasure on the horizon!

Stick around and be the first to learn about the new voyages of Captain Hooter – we’ll keep you posted!