Home > Animals And Cannabis: Can Beasts Get Baked?

The active ingredients found in weed trigger all sorts of effects in our brain and our body. Theoretically, many of these effects could also appear in animals. We know that many species like to nibble on cannabis plants every now and then, or consume other substances that can get them high or tipsy. And yet, animals respond to cannabis in ways that differ from how we humans react. What’s for sure, however, is that animals react to it, too. That begs the question: are animals and cannabis a good combination, or should you keep your dog and your rabbit as far from your stash as you can?

Animals And Cannabis: Do They Match?

Just like us, animals like to get away from the trappings of ordinary life every once in a while. You can see elephants and monkeys munching on fermented fruit, which will get them drunk. Incidentally, you do not want to mess with a boozy elephant – that’s our tip of the day for you right there. Reindeer have been observed tripping on magic mushrooms in Northern forests. As you can see, the animal kingdom has all sorts of highs available for many different species. Cannabis, though, is surprisingly popular among a huge range of animals. And yet, that doesn’t mean you should let your pets dig into your stash whenever they feel like it. For animals, the effects of cannabis can be very different than for us; in fact, it can even be toxic.

Ever seen a dog roll a spliff? We didn’t think so. Skinning up can be quite a challenge when you don’t have thumbs. If animals and cannabis meet, they usually do so over dinner. Pets in particular have a reputation to gobble down a bud or two when their owners aren’t paying attention. But does that get our furry friends stoned? After all, don’t you need to heat fresh weed before decarboxylation activates the THC? True as that may be for us, even ‘raw’ buds can have an effect on certain animals – and in many cases, those effects are bad news for the creature concerned.

Look What The Cat Dragged In

You’re in more serious trouble the moment an animal runs off with your hash brownies. Can’t find that weed muffin or THC gummy that was on the table two seconds ago? You’d better get ready to call your vet, because edibles contain decarboxylated cannabis that can definitely get your pets in trouble. In fact, cannabis can affect animals in worse ways than us. Another factor to consider: many edibles contain ingredients like chocolate or sweeteners such as xylitol, which can be deadly for animals in extreme cases. Make sure you keep your muffins, candies and brownies out of their reach – or just eat them before your furry friends get the chance.

Even though animals don’t smoke joints, they can still inhale second-hand smoke. What you exhale can have consequences for the animals around you, for a very simple reason. Just like humans do, most of the other animal species, except for insects, have an endocannabinoid system. This biological system reacts to compounds produced by our own body that resemble cannabinoids (i.e., endocannabinoids). The system also reacts to phytocannabinoids produced by cannabis plants, however. That explains why having weed around animals calls for the same level of caution you would observe around children: they could get into real trouble if you’re not careful.

Dogs Can Get Baked Too

Just like their bipedal owners, dogs can get pretty baked on cannabis. However, whereas humanoids tend to actively seek the euphoria and mind-altering effects the plants brings them, canines have very different highs. Dogs don’t have our highly rational brains to deal with the experience. They respond in more instinctive ways, based on emotion. If they get baked, they will not understand what is happening. Your dog could get scared, hyperactive, hypersensitive, or worse. Stoned pets can keel over while walking, get disoriented, start drooling or urinating uncontrollably, and even go into seizures or a coma. Obviously, that’s not what you want.

Dogs can get high by eating the plant or edibles, and by inhaling smoke. Be aware that for a dog, being stoned is way less enjoyable than it can be for you, and that it can in fact be very dangerous.

Cats are known to chew on weed plants occasionally. Just like dogs, they too have an endocannabinoid system that lets them respond to cannabis. When they experience any effect, though, they will not know what is happening, causing similar panic and fear as that seen in dogs. In fact, the effects of cannabis can harm their brain and peripheral nervous system. So maybe you’re wondering: well what about catnip? Don’t cats enjoy that weed? It’s true that watching cats sniff or eat catnip can be like watching a stoned human sometimes. Catnip causes dilated pupils, and you may notice your cat get more playful, roll around across the floor in rhapsody, or fall asleep after a deeply satisfying catnip session.

However, cannabis and catnip are two very different plants. Consequently, they affect the feline brain and body in different ways, too. Catnip does not work through the ECS. If cats ingest cannabis, the effects are largely similar to what we see in humans. Dilated pupils and loss of muscle control are common, for instance. THC can be toxic to cats, though. The real danger lies in the fact that symptoms of intoxication may be hard to spot: you may well miss them altogether. These symptoms can be very serious, including slower heart rate, shallow breathing and lower body temperature. These effects can persist for hours, even days, and can be dangerous for your cat’s health.

What To Do If Your Pet Eats Your Weed?

Okay, so you have been warned: animals and cannabis are hardly a perfect match. But what do you do if your pet ingests cannabis despite your efforts to keep your weed stashed away? Our most important tip: take it seriously. Don’t just sit back and giggle while your dog staggers drunkenly around the room, or lies on the couch in complete apathy. Check for signs of fear or stress, and try to calm your animal down if it appears to freak out. If you don’t trust the situation, consult a veterinarian. Just be candid and explain what happened. Vets aren’t that interested in the weed you have at home; they just want to make sure your dog or cat pulls through.

Treatment usually consists of trying to make the patient vomit, to make sure any ingested cannabis is expelled ASAP. Your pet pal may have to stay over for a bit until the effects wear off, but generally speaking, that’s as far as it goes. At any rate, you’ll prevent serious problems from arising because you’ve left your stoned pet to fend for itself.

Only a handful of studies have looked at horses and their relation with cannabis. We know that they like the taste, and we also know they are capable of getting stoned. At any rate, the US animal welfare organisation ASPCA considers cannabis toxic when it comes to horses. Stoned horses typically display symptoms such as motor impairment (swaying and staggering), lethargy, fear, and blood pressure fluctuations. For now, we can safely conclude that giving weed to a horse is a bad idea. Period.

Other Animals And Cannabis

Although only mammals, birds and fish are known to have an endocannabinoid system, spiders can react to cannabis, too. It turns out that weed gives spiders a very hard time completing their webs, as scientists have known for almost a century. If they manage to build a web at all, stoned spiders produce a messy tangle of a web. Still, they appear to produce better webs while high on weed compared to when they are given sleep medication, for instance.

Fish can get stoned, too, although they react differently from what you might expect. In a 2017 study, researchers gave cannabis to zebrafish to find out whether they’d become more relaxed. It turned out that weed mainly served to increase their metabolism and caused them to eat more. Let’s put it this way: the first ever case of underwater munchies has been officially recorded!

So what about other insects? Well, sadly for them, they are unable to get high on weed like we do, because they have no ECS.

Animals And Cannabis: CBD Instead Of THC

Do you have a pet that you think may benefit from the calming effects of cannabis? If so, you’d better not give it weed; not for the effects of THC at least. Don’t try feeding animals parts of cannabis plants or edibles, and don’t blow smoke at them either. Remember that you can decide for yourself whether you want to get high or not; your pet doesn’t have that luxury. So just to be clear: don’t try to get animals stoned! 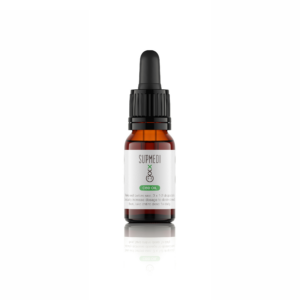 What you can do, though, is try giving your pet CBD. Cannabidiol is suitable for animals, and using this cannabinoid can be a good idea for various reasons. CBD can have relaxing effects, and it can help your pet to calm down. CBD can also work as an analgesic and anti-inflammatory agent for a range of conditions, which can prove very helpful with aching joints, for instance. If you want what’s best for your pet and you prefer a natural basis, CBD Oil just may be the thing to try.

If you would like to learn more about how CBD supplements could help your (pet) animals, you should read this blog on how CBD can help tackle a wide range of animal conditions, without the side-effects usually associated with regular medication.

The Only Species Allowed To Get High

So there you have it. You now know that most animals can in fact get high and feel the effects of cannabis, though they may experience these effect in different ways. Just to be sure, we’re going to repeat this one more time: there’s only one animal species that’s allowed to get baked, and that’s good old homo sapiens: ourselves.