Research into the valuable compounds found in cannabis is progressing steadily. Today, the focus of study is shifting towards cannabis terpenes such as limonene. We already know a great deal about cannabinoids like THC and CBD, but there is much yet to learn when it comes to the terpenes found in weed plants. Science keeps uncovering new ways in which terpenes determine the effects of specific strains, both in a medical and a recreational sense. The terpene limonene carries a tell-tale scent: that of lime and other citrus fruit. It is also found in cannabis. Weed with high limonene content allows the compound to affect the intensity of your high by stimulating the effects of cannabinoids. Moreover, limonene appears capable of supporting the immune system and relieve symptoms of depression.

Terpenes And Their Uses In Cannabis

Just like other plants and even animals, cannabis plants produce their own terpenes for personal protection. Terpenes help the plant repel certain predators, insects, and bacteria. At the same time, they help attract useful insects to the plant’s flowers. All in all, terpenes are crucial for the survival of cannabis plants.

Cannabis contains a broad spectrum of different terpenes. Every strain has its own specific terpene profile, indicating the composition of various terpenes such as myrcene, caryophyllene, humulene, and many more. Although we used to think terpenes are only useful to plants, it now turns out that they can also be beneficial for humans. If you know the terpene profile of a specific type of weed, you’ll be better able to pinpoint specific strains carrying the effects that you are looking for.

Beyond cannabis, limonene is found in considerable quantities in citrus fruits like oranges and lemons, but it is also present in rosemary, juniper, and pine trees. Also known as carvene or citrene, this substance is frequently used in cleaning agents, perfumes, solvents, and insecticides. Research indicates, however, that limonene also has potential to support our health. High-limonene weed strains could unlock those medical benefits, but they can also influence the high effects in subtle ways. Limonene is easily absorbed into the bloodstream after inhalation, allowing for rapid onset of its effects.

Limonene In Cannabis: Scent And Taste

Limonene is easy to detect by its highly distinctive scent. The smell is reminiscent of lime, orange and lemon. Still, two different variants of the same limonene molecule exist: the so-called stereo isomers. These are in fact two versions of the same molecule, only arranged differently in terms of their 3D structure. Whereas D-limonene smells like oranges and other citrus fruits, L-limonene carries the scent of pines.

How Limonene Affects The Cannabis High

Limonene’s hallmark citrus scent is used far beyond the cannabis context. You will find limonene in a range of beauty products and cleaning agents, as well as in a whole range of foodstuffs. Limonene has more uses than simply filling the room with uplifting lemon scents, however.

If a strain of weed contains lots of limonene, that will affect the high it causes. Although limonene does not trigger psychoactive effects of itself, the entourage effect allows terpenes to influence how other terpenes and cannabinoids work. In addition, limonene increases permeability of the mucous membranes and the skin, which could help increase the effect of edibles or topicals, for example.

The terpenes limonene, caryophyllene, and pinene use this characteristic to change the effect of THC. The general consensus is that these terpenes focus the effects of THC on the brain rather than throughout the body. That would result in an experience described as ‘high’ rather than ‘stoned’. Still, such experiences are highly subjective, and they depend on many other factors than terpenes alone. Again, these effects are only intended as rough guidelines when selecting your strains.

Keeping The THC Effects In Check

Limonene can counter some of the less pleasant side-effects of a THC high. Similarly to the cannabinoid CBD (cannabidiol), it can help moderate the intensity of the high caused by THC. This can be useful information for anyone that is sensitive to these effects. It’s also a good example of how knowledge of terpenes can help growers and consumers pick the best strains.

Even though terpenes are quite literally a matter of taste, limonene is widely appreciated for the cheerful touch it brings to cannabis strains along with its instantly recognizable aroma. This terpene is known to add some smile to any high, while also promoting the free flow of creative thought. Limonene is especially recommended for use in social settings, where it a is capable of lifting the mood in the whole room based on its wonderful fragrance alone.

Limonene has been associated with medical properties, including the ones listed below. Do keep in mind, however, that science is just beginning a thorough exploration of terpenes in cannabis. These are not hard medical claims; they are simply indications and direction to help you find the best cannabis seeds.

Positive Effect On Anxiety And Depression

Neurotransmitters are vital in determining our moods. If you are experiencing anxiety and stress over extended periods, you risk disrupting the balance between several of these neurotransmitters. These chemicals carry messages from one nerve cell to the next. Examples include serotonin, critical for processing emotions, and dopamine, which is a central compound in the experience of pleasure and happiness.

The influence of limonene on neurotransmitters was studied in 2013. It turned that on top of increasing the availability of serotonin, limonene can also reduce anxiety symptoms. It was also demonstrated to influence adenosine receptors, which can in turn promote dopamine production. That could have positive effects on anxiety disorders as well as on depression, leading scientists to suspect limonene may be useful in tackling either condition. 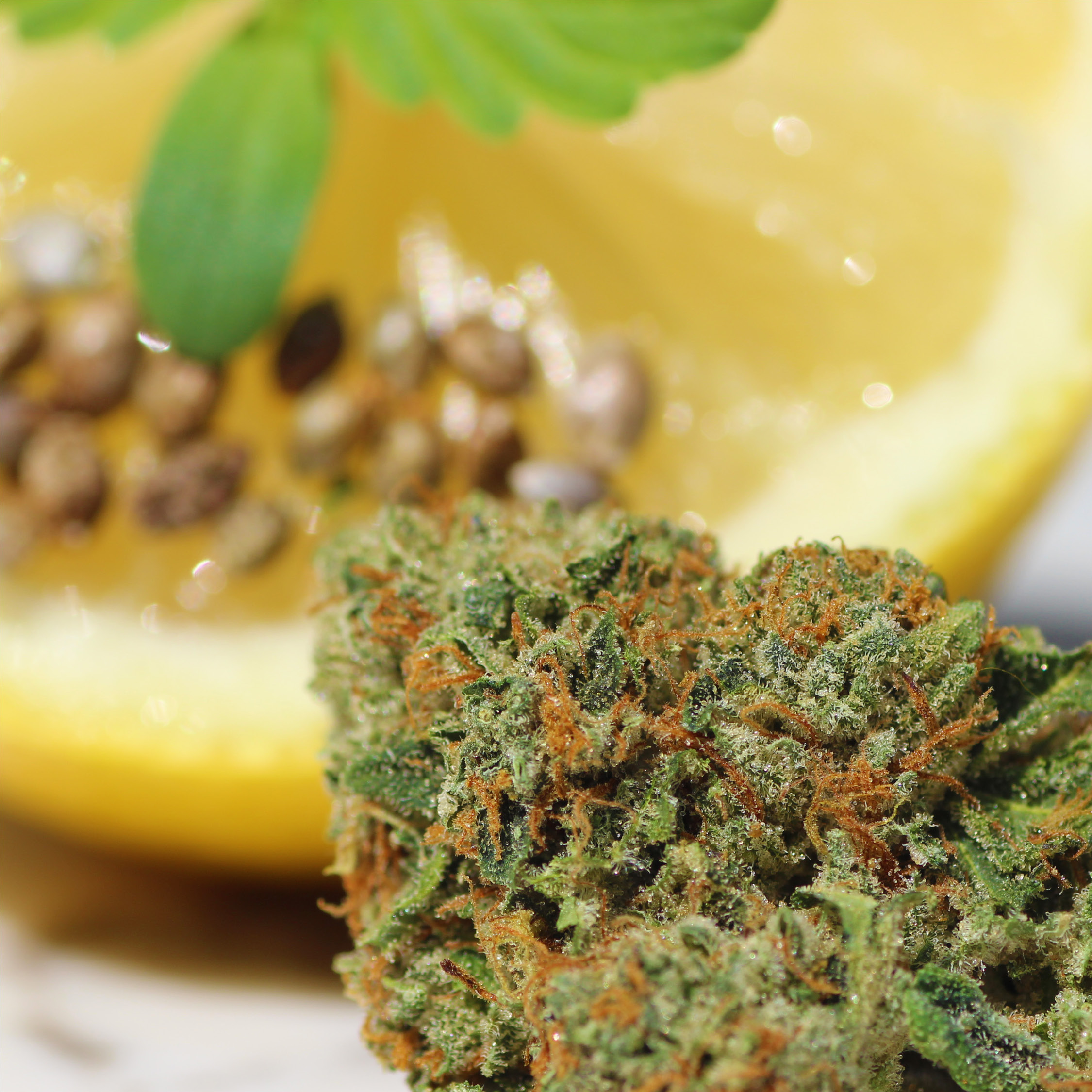 Limonene can be used to counter heartburn and reflux symptoms. A study from 2007 showed that d-limonene has a neutralising effect on acid. Patients administered a 1000mg daily dose of limonene noticed rapid improvement in their conditions.

On top of that, limonene helps against one of the underlying causes of gastric acid problems: bile entering the digestive tract at the wrong moment. D-limonene proved capable of dissolving bile while it was still in the gall bladder. That allowed reflux to be tackled at the source, preventing problems before they arise.

Terpenes can boost the immune system, as research has shown. One of the effects of limonene is to ramp up production of antibodies, and to promote multiplication of cells that produce antibodies in the spleen. These results did not occur in a control group of mice that did not receive limonene.

Chronic inflammation can be a serious burden on the body as a whole. Studies have shown that limonene is capable of countering inflammation. It can reduce inflammation markers related to arthrosis. A 2015 study conducted on human cartilage tissue indicated that limonene decreases production of nitrous oxide. Nitrogen is a signalling molecule that plays an important part in plotting inflammation trajectories.

There is even a possibility that limonene could help counter cancer. This was inferenced from large-scale population studies. These showed that people who regularly eat the peels of citrus fruits (an important source of limonene) had decreased risk of contracting skin cancer, even compared to people using only the fruit or juice itself.

Limonene is found in many different cannabis strains. Often, a hint of lemon flavour is enough to signal its presence. Still, some strains are more citrus-packed than others, so here are our best strains that are all but dripping with limonene.

Lemon Haze is the sativa-dominant daughter of two other limonene smash hits: Lemon Skunk and Silver Haze. You’ll notice it the moment you taste the sweet citrus flavour carried in the buds, although astute growers will smell lemons long before harvest time arrives.

The effects of Lemon Haze are fully in line with expectations of high limonene content. This is an activating, creativity-promoting strain with uplifting effects bordering on the euphoric. Medically speaking, pain control is a Lemon haze forte; although low moods and lack of sleep are equally good reasons to give this flower a try.

Yet another beautiful limonene strain is to be found in Lemon Ice, which sprang from a successful crossing between Lemon Haze and Ice. That makes it hardly suprising to find all the traits you already knew if you ever grew Lemon Haze seeds before. Like its mother, Lemon Ice is a 60/40 sativa-indica hybrid, with a tad more punch than her ancestor packs inside. 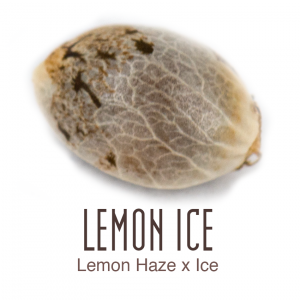 Here too, stress, pain, and depression are the main spheres of inlfuence; without a doubt, its high limonene content contributes squarely to these effects. Beyond medicinal applications, a cheerful, happy mood is the main result of the refreshing terpenes in Lemon Ice’s profile. What makes Lemon Ice unique, though, is her ability to bring all the jolly vibes of limonene, while still being sufficiently relaxing to promote a good night’s sleep. Of course, that’s partly due to other terpenes present in its makeup: with Northern Lights in its lineage, kushy flavours are prominent in the overall bouqiet.

Whether it’s about happy feelings, delicious citrus flavour, or a range of medical possibilities, growers can go all-out with our top limonene cannabis seeds. If you’re looking for more tips to grow limonene cannabis outdoors or indoors, read our grow blogs for more info. The strain blogs on our website provide further details about other terpenes, plus loads more on all the other goodness you’ll find in the Amsterdam Genetics seeds collection.