Cannabis contains more than cannabinoids alone. Terpenes such as myrcene are important, too. Although terpenes are less well-documented by science, these compounds do have very special properties of their own. Terpenes occur in just about all plants and their fruits. Plants, herbs, and trees produce terpenes to protect themselves and increase their chances of survival. Terpenes can be used for medicinal purposes, but they can also add subtle effects to the highs of specific strains. So far, some 140 terpenes have been identified in cannabis plants. Together, they culminate in the unique aromas characterizing individual strains. Terpenes have much more to offer than aromas, though. This blog focuses on myrcene, an important terpene found in many cannabis strains.

The Purpose Of Terpenes In Cannabis

From a biological perspective, cannabis plants are outright amazing. The effects of cannabinoids alone are spectacular. CBD, THC, CBG and CBC, to name but a few, each have their own influence on our mind and body. By now, more than 130 cannabinoids have been identified. Cannabis has more to offer, however; in this particular case, we focus on terpenes.

Terpenes are volatile, aromatic organic compounds that give plants, trees, and indeed certain animals their particular scent and taste. Plants use them for protection against herbivores and insects, as well as against harmful bacteria and diseases. Furthermore, terpenes play a part in oxygen distribution and tissue repair. That makes them vital to the life of many plants and animals alike.

Cannabis produces terpenes in the same trichomes that generate cannabinoids. Production is affected by light spectrum and quantity. Every weed strain has its own unique traits and terpene profile.

Terpenes are less well-documented than cannabinoids. However, what research has been done demonstrates how these aromatic compounds could help support our health. Below, you’ll find out more about myrcene, one of the most common terpenes found in cannabis. 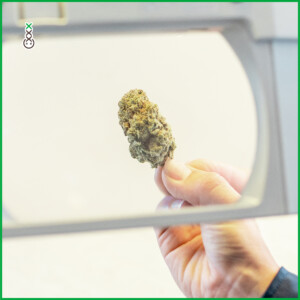 Myrcene In Your Cannabis

The scent associated with myrcene is earthy and herbal. Smelling myrcene reminds most people of cloves. You can find it in the aroma of thyme, beer, lemongrass, and , of course, cannabis. Although myrcene makes up about 60% of all terpenes in some strains, averages range around 20%.

Myrcene has various direct effects on the body, but perhaps its indirect effects are even more important. When cannabinoids, terpenes, and other cannabis ingredients working together to produce effects, we call those entourage effects. Myrcene provides a great example of an entourage effect: as we’ll explain below, this terpene makes it easier for cannabinoids like THC to reach the brain cells, allowing for faster and more intense effects thanks to the entourage effect.

How Myrcene Affects The Cannabis High

Myrcene is a very common terpene that we encounter in most cannabis strains. Interestingly, it is also one of the most outspoken terps when it comes to its effects on the high, making myrcene-heavy strains a good example of entourage high effects. Myrcene is strongly associated with the sedative effects of THC. This terpene can make this aspect of a cannabis high more prominent, resulting in a deeply relaxing, laid-back experience.

The effects of myrcene on the expression of indica-dominant strains can become overpowering in high doses, leading to couchlock results that leave unsuspecting consumers slouched on the sofa regardless of what other plans they had. There is an upside to this myrcene property too, though. Myrcene is known to improve more natural sleep cycles, which can help anyone looking to feel fresh and ready to face the day after a good night’s sleep. Getting the timing right is key here, so being well-informed on the subtle effects of terpenes appears key in making the most of myrcene and its wonderful companions.

Myrcene’s potential effects on the brain relate to its ability to lower the resistance of the blood-brain barrier. This allows chemicals to pass through the barrier faster and more easily. The same applies to THC in weed, speeding up its effects and increasing their intensity. Myrcene also affects the saturation levels of CB1 receptors in the endocannabinoid system. This too can increase THC’s psychoactive effect. Consuming weed with lots of myrcene will therefore tend to make the mental effects more intense. 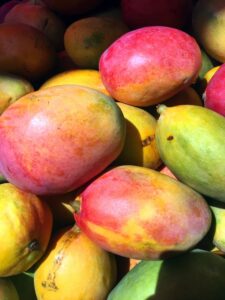 Cannabis connoisseurs have debated for a long time whether eating a mango before consuming cannabis adds to the effect. We’ll admit that it sounds pretty out there, but research has shown mangoes to be absolutely loaded with myrcene. That affect the brain-blood barrier, enabling mangoes to boost effects using terpenes. Added bonus: mangoes are a healthy and delicious addition to any diet!

Myrcene also has sedative effects. The calming influence of cannabis can really help people suffering from stress and anxiety. Natural healers and people still in touch with natural medicine use plants and herbs rich in myrcene as a sedative and sleep remedy. Modern science is still trailing behind when it comes to ancient knowledge and traditional medicine, but myrcene as an alternative for synthetic sleeping pills is certainly an interesting option to explore. 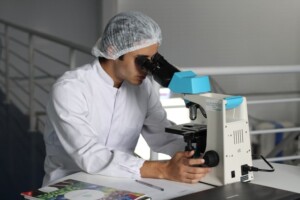 Myrcene has been studied, and is still being studied today, for a number of interesting medicinal properties. If you are looking for a high myrcene strain for medical reasons, it’s good to keep in mind that research is still in its infancy. The type of clinical studies needed to substantiate hard scientific conclusions is a long-term trajectory, so please don’t count on a myrcene doctor’s prescription anytime soon. The possibilities outlined below should only be used as a general guideline to find the best high-myrcene cannabis seeds.

Myrcene As A Muscle Relaxant, Analgesic, And Anti-Inflammatory Terpene

Myrcene is known to work as a muscle relaxant, but this has only been demonstrated in mice so far. It has analgesic and anti-inflammatory properties too, as was established in the nineties. Further research is needed to provide definitive proof, though.

Myrcene And Protection Against Cancer

Another property of myrcene is its ability to block activity of cytochrome, aflatoxin B, and other carcinogens. Research also demonstrates that myrcene may help prevent ulcers and bowel pustules.

The blood-brain barrier effect associated with myrcene has implications for pain control, too. As lowering the barrier eases access to the brain for other compounds, the analgesic effectiveness of a range of substances could be increased as well. That applies for myrcene’s own properties, but perhaps even more so for painkiller cannabinoids such as CBD and THC. This makes high myrcene strains very interesting in the search for medicinal cannabis against pain.

Myrcene As An Antioxidant

Myrcene is also known as an antioxidant. These help protect the cells of your body against free radicals and the damage they cause. All things considered, myrcene appears to be a highly versatile, useful terpene.

The following Amsterdam Genetics strains are particularly high in myrcene. Do keep in mind, though, that grow techniques, soil type, and grow conditions have a big impact on the exact terpene profile of any strain.

A high-power strain from our Homegrown collection, Fatkid’s Cake contains more than just impressive THC percentages. Myrcene content is high due to powerful genetics. With Girl Scout Cookies and Cherry Pie for parents, Fatkid’s Cake seeds grow into strong and robust plants that pack quite a punch.

If you’re looking for our most potent high myrcene cannabis strain, then look no further. A 60/40 indica/sativa background lowers stress and eases the nerves as it counters pain with an uplifting and soothing effect as icing on the Cake. 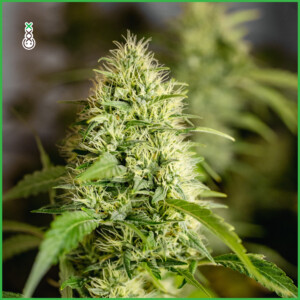 AK-OG Kush grows best in indoor conditions, but this twin legend can yield impressive harvests in the open air, too.

Growing Your Own Myrcene Cannabis

With this terpene knowledge in mind, any frower can order cannabis seeds with high myrvene potency inside. The AG webstore offers plenty of choice! Our grow blogs provide tips and techniques any grower can try. You’ll find information on other terpenes and more besides in our strain blogs.