It might be rewarding to grow your own cannabis. After months of hard work and patience cultivating your seedling into big smelly buds, growers finally get to harvest their plant(s) to consume them. But what are the best ways to consume your freshly harvested weed?

Growing cannabis can be extremely rewarding. As most growers will tell you, cultivating your own weed to consume can even be therapeutic in a sense. However growers experience the cultivation-period though, there is one moment all growers look forward too. After all, growing weed is all about the end result. Harvesting big smelly cannabis buds covered in cannabinoid-packed trichomes.

After finally chopping down your plants, it is advised to dry and properly cure your cannabis flowers. This process is essential to preserve the weed’s intense aroma and taste – and will definitely increase the effects when you consume it. Given time, the deliciously smelling buds will soon be perfectly ready to be consumed. In one of the five most popular ways of consuming cannabis, for example:

Obviously, the best known way of consuming your homegrown herb is to smoke it. To do so, simply grind up your flower with a good grinder, roll yourself a filter tip and start rolling up your cannabis in Amsterdam’s best rolling papers. Although the majority of European cannabis users like to mix tobacco in their weed, we advise you not to. Smoking pure cannabis is better for your lungs and heart in comparison to smoking weed mixed with tobacco, as British researchers have shown.

Moreover, smoking pure weed decreases the chances of ‘paranoia’ and other negative effects a mixed joint can have on the mind. As research shows it is not the weed, but probably tobacco in joints that cause this mental distress. To make smoking pure easier, Amsterdam Genetics has introduced The Weezy Smoking Pipe. An easy aluminum smoking pipe to use in combination with the ingenious Jack-Pods, much like a Nespresso machine. Furthermore, the Weezy pipes are provided with an active carbon filter to filter any tar and other unwanted elements out of the smoke. Guaranteeing a tasty, potent and clean smoking experience.

Another clean way of inhaling cannabis is ‘vaping’ it. Vaping or vaporizing is usually done with a portable or tabletop ‘vaporizer’, of which two main forms exist. Some vaporizers heat up your bud indirectly using convection, like the Volcano used in our signature Smoke Sessions. Where hot air travels through ground cannabis (or sugar leaves) vaporizing its active components like THC, CBD and terpenes to inhale.

A second form of vaporizing is conduction – where your cannabis is directly heated with a heating-element. The latter is often less effective, as the cannabis is not heated as evenly as with convection-heat. Leaving some bits pitch-black while the other side still looks lush and green, full of active components. When asked, the majority of vapers will most-likely advise you to buy a convection-vaporizer. If you’re looking for the best experience and most effective machines, that is.

One of our favorite ways to get baked, is to bake! Cannabis flowers, and even the ‘sugar leaves’ left after giving your buds a nice trim, can be turned into the most delicious and potent edibles. The best thing about it, is that you don’t have to be a Michelin-star chef to bake a ‘spacetry’ (space cake). Though if you can make a cup of tea – you can also make a tasty and well-hitting piece of cake at home. 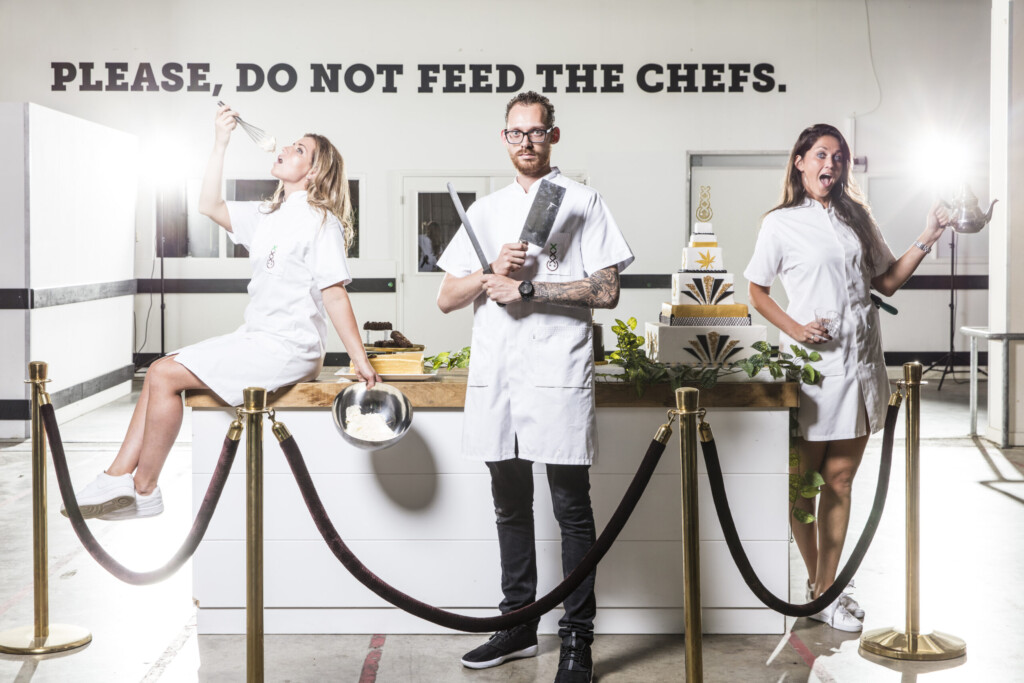 For a good cannabis edible, your weed needs to be decarboxylated. A process where the non-psychoactive cannabinoid, THCa, is converted into the beloved psychoactive THC. By covering and heating the plant material for a certain time at a certain temperature, for example. Low enough to not lose any active components, like an hour in the oven on 110 Degrees Celsius. We then advise you to infuse a base-ingredient like coconut oil, butter or milk (anything that has some fat in it) with weed. And store this in your fridge to use whenever you feel like it. This way you could mix a scoop of canna-coconut oil into any recipe you make. Or simply drop it in your morning coffee on ‘one of those days’. 😉

The most popular way of processing cannabis we’ve come across over the past few years, is pressing it into rosin. Rosin is a solvent-less cannabis extract. Often made by pressing a cannabis sample (flower or hash) under high pressure, a certain temperature and specific amount of time. This is an intense physical process. Lately being eased by industrial size ‘rosin-presses’ and special machines for home consumption. Of course you could choose to make ‘traditional hash’ instead of a dabable concentrate. Though we don’t think it’s worth the trouble. Considering that for one gram of our prime-quality block hash, 100 grams of weed are used.

Pressing weed or hash under these conditions extracts the active components from the flower. Leaving you with an even more potent, and better tasting cannabis product: rosin. This concentrate can be used in edibles and special vaporizer pens or ‘dabbed’. A form of cannabis consumption using ‘rigs’ or special vaporizers. Of course, you can also ‘twax’ a joint with rosin; sticking some of the rosin on the inside or outside of your rolling paper for a more potent effect. Other cannabis extracts are made with (more dangerous) solvents like gas and specific liquids and may be known as ‘shatter’, ‘BHO’ or ‘wax’.

Though there is another well-known form of extracting the active components from cannabis – mainly for oral consumption. Because one of the easiest and healthiest ways to consume weed, is dropping a few drops of concentrated cannabis oil under your tongue. A popular form of canna-consumption in The Netherlands. Where it is mostly used by patients and senior citizens, naming it the ‘people’s medicine’.

This form of cannabis oil is easily made by simmering your cannabis on a low temperature in coconut oil for a while. Though the best-known method of making cannabis oil, is using the Rick Simpson method. Washing your cannabis in a solvent like alcohol and carefully let the alcohol evaporate on a low temperature. Until all you’re left with is a brown / black substance, full of cannabinoids. This RSO (Rick Simpson Oil) or full-spectrum cannabis oil can be saved in syringes for easy access. Or diluted with a carrier like olive oil, coconut oil or hempseed oil and kept in a dropper bottle for easier dosage.

What is your preferred method of cannabis consumption? Let us know on Instagram!